The event is held under the patronage of
H. E. Bea ten Tusscher
(Ambassador of the Kingdom of the Netherlands)
and thanks to the generous support of:

Ralph van Raat (b. 1978) has been completely fascinated by classical music of the twentieth century since the age of 14. Although his repertoire ranges from Bach to Boulez, his primary focus has always been on composers dating from Debussy, Bartók and Ives to present day masters. His aim is to convince his audiences of the immense beauty and diversity of the music of our own time through solo recitals, lecture-recitals, concerto performances, CD-releases and special projects.
Pianist and musicologist Ralph van Raat studied the piano with Ton Hartsuiker and Willem Brons at the Conservatory of Amsterdam and musicology at the University of Amsterdam. During his piano studies he was admitted to the select Provision for Outstanding Musicians, a special training course for exceptional students. He graduated cum laude in piano as well as in musicology. As part of the Advanced Programme of the Conservatory of Amsterdam, and funded by the Dutch cultural trust Prins Bernhard Cultuurfonds, Van Raat studied with Claude Helffer in Paris, with Ursula Oppens at Chicago’s Northwestern University, with Liisa Pohjola in Finland and with Pierre-Laurent Aimard at the High School of Music in Cologne. He has won a large number of prestigious international prizes and awards.
Van Raat regularly appears as a recitalist in both the Netherlands and abroad – in Europe, the Middle East and Asia as well as in the United States. His concerts are regularly broadcast by both Dutch and foreign radio and television networks. He has been engaged for his own radio series on contemporary music by Dutch national broadcasting and has been honoured with his own concert series by the Concertgebouw of Amsterdam, the Muziekgebouw in Amsterdam and De Doelen in Rotterdam.
Van Raat has often performed as a soloist with orchestras including the Los Angeles Philharmonic, London Sinfonietta, the BBC Symphony Orchestra, the Royal Concertgebouw Orchestra, the Rotterdam Philharmonic Orchestra, the Netherlands Radio Philharmonic Orchestra, the Radio Symphony Orchestra of Frankfurt, the Aarhus Symphony Orchestra, the Dortmunder Philharmoniker, the Shanghai Philharmonic Orchestra and the China National Symphony Orchestra. He has worked closely with conductors such as Valery Gergiev, JoAnn Falletta, Susanna Mälkki, David Robertson, Peter Eötvös, Stefan Asbury, Michel Tabachnik, Jac van Steen and Otto Tausk. He has performed as a soloist at many prestigious international festivals.
Ralph van Raat has had an exclusive contract with the international record label Naxos since December 2006. His first recording for Naxos, the complete piano works by John Adams, received top ratings in several magazines. It was highlighted as a CD of the month in Gramophone. His second CD, with Frederic Rzewski’s The People United Will Never Be Defeated, was labelled a Benchmark CD in BBC Music Magazine and Highly Recommended by Gramophone. In December 2010, within a month after its release, Van Raat’s CD with Hans Otte’s Das Buch der Klänge (The Book of Sounds) was chosen as CD of the Week by Dutch public radio. Van Raat’s recording of Arvo Pärt’s piano music received a 5/5 star rating in BBC Music Magazine. One of his most recent recording, piano duo works by Debussy and Messiaen has been nominated for the Spellemannsprisen 2012, the Norwegian equivalent to the Grammy. The Rzewski recording as well as those of the complete piano works by John Adams, Gavin Bryars and Sir John Tavener have all been bestsellers, having ranked among the Top 20 bestselling Naxos albums worldwide. This resulted in the publication of a special dedicated Artist Portrait CD-box in 2009, with his complete recordings for Naxos to date.
Many composers worldwide have dedicated piano compositions and concertos to him. He has worked directly with many composers on the interpretation of their piano works.
Van Raat teaches contemporary piano music interpretation at the Conservatory of Amsterdam. He regularly gives master classes, lectures and workshops and has done so at the conservatories of Tirana, Nizhny Novgorod, Kiev, the Ligeti Academy of the ASKO/Schönberg Ensemble, etc. as well as for many other universities and institutes.
Ralph van Raat was named a Steinway Artist by the Steinway piano company in 2003, joining an exclusive circle of renowned artists including Vladimir Horowitz, Martha Argerich, Alfred Brendel, Lang Lang and Keith Jarrett. He records exclusively on Steinway pianos and uses the Steinway piano as his preferred instruments for performances worldwide. 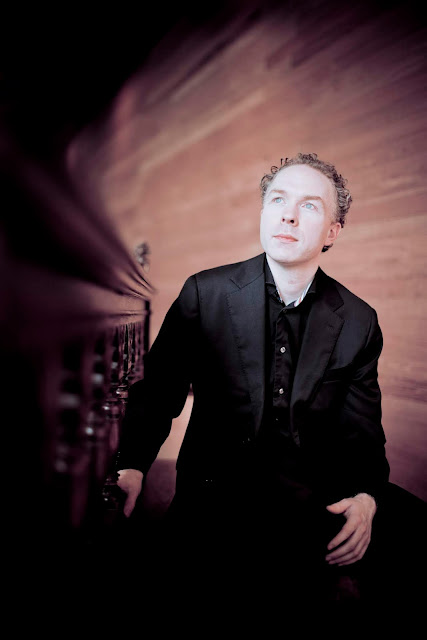 
Pierre Boulez (1925 – 2016) is one of the most significant French composers of his generation, as well as a noted conductor and music theorist who championed the work of 20th century composers.
Boulez majored in mathematics at the Collège de Saint-Étienne, where he also studied music; he later studied mathematics, engineering and music in Lyon. In 1944–45, he studied with the composer and organist Olivier Messiaen at the Paris Conservatory. Subsequently (1945–46), he studied twelve-tone technique with René Leibowitz, who had been a student of Arnold Schoenberg, the father of twelve-tone music.
In 1954, Boulez founded a series of avant-garde concerts, the Concerts Marigny, which were later renamed Domaine Musicale. By the 1960s, Boulez had gained an international reputation not only as a composer but also as a conductor, particularly of 20th century repertoire. In the mid-1970s, with the support of the French government, Boulez created and directed the Centre for Musical and Acoustical Research (IRCAM), the experimental music organisation housed in the Pompidou Centre in Paris. The instrumental group he established there, Ensemble InterContemporain, has become one of the world’s most important contemporary music ensembles. Boulez toured with the group as its conductor until 1991 and continued as president thereafter.
Boulez’s complex, serialist music is marked by a sensitivity to the nuances of instrumental texture and colour, a concern also apparent in his conducting. His earlier compositions combine the influence of the twelve-tone composers with that of Messiaen and, through him, of certain East Asian musical elements. Boulez was also influenced by the work of the poets Stéphane Mallarmé and René Char. 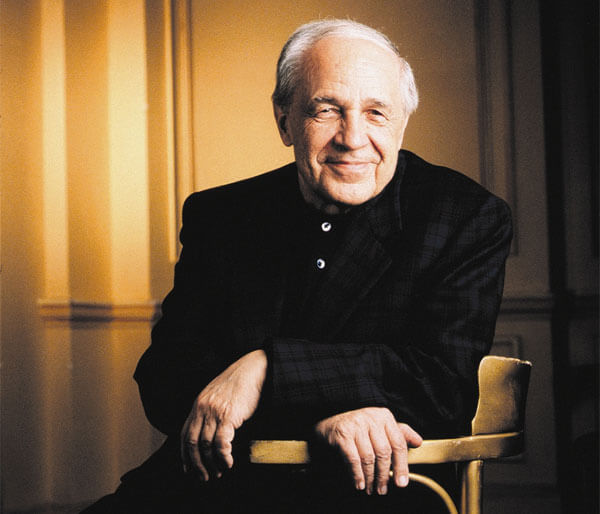 The Programme / The Works

As part of this all-Boulez programme, I will have the pleasure to present the Bulgarian premiere of Boulez’s still unpublished triptych Prélude, toccata et scherzo (1944–45). With permission by the Boulez Family and the Paul Sacher Stiftung, Basel, I’ve performed its world premiere at the Philharmonie de Paris in September 2018, as well as its North American premiere at Carnegie Hall a month later. This substantial work will be combined with Boulez’s opus 1, the Twelve Notations, written only a few months later, and the two works which resulted from Boulez’s very last returns to his native instrument, the piano: the highly virtuosic Interpolations (1994, revised 2001) and the dramatic A Calendar Page (2005).
From 1944, the young Pierre Boulez started to get lessons in harmony from Olivier Messiaen and counterpoint from Andrée Vaurabourg-Honegger, before his official enrolment as a student at the Paris Conservatoire in 1945. It was during this time that he wrote the large-scale triptych Prélude, toccata et scherzo. The work is a testimony of the young composer’s gifts of invention, featuring extremes in dynamics, register and pianistic demands. While the Prélude echoes the piano writing of his primary role models (Messiaen, Honegger and Jolivet) by the irrational rhythms, gamelan-like harmonies and somber, expressive character, the Toccata foreshadows the later Boulez: it drives a fugal theme (containing sections of all twelve tones of the chromatic scale) to explosive outbursts in between rather rhapsodic interpolations which borrow the interval structures from the theme. The closing Scherzo also consists of two contrasting elements: a volatile percussive theme alternating with a static melodic theme accompanied by bell-like chords. This movement is highly structured, with both melodic and harmonic material derived from a rising seven-note motif which is repeatedly audible in the right hand throughout the movement, with rhythmical interjections in the left hand.
The lyrical, tolling bell sections of the Scherzo foreshadow the mood of some of the otherwise radically different Twelve Notations, which he composed months after finishing the above-mentioned triptych. The expansive and drawn-out structures suddenly made room for short pieces, highly concentrated in their expression, amount of notes and moods. The cause of this radical change can be found in the fact that Boulez had just been introduced to the works of Anton Webern by Rene Leibowitz, with whom he had started to study at the end of 1945. Notated on the back of several sheets filled with sixteenth-century counterpoint, the number twelve plays an important role in this collection of pieces: each consists of twelve bars, and they all make use of the same twelve-tone row. It is striking how different each miniature sounds despite using this same pitch material; not only are echoes of Debussy’s impressionism audible, but also the irregular rhythms so typical of Messiaen, and the tam-tam-like rumbling of bass notes, relating to Boulez’s interest at the time in ethnic music.
Even in Boulez’s last completed piano work, A Calendar Page from 2005, many facets of his earlier works have remained. Written by invitation of Universal Edition to compose a piece for piano students, this gem contains highly contrasting sections: slow free-timed sections full of resonance sounds and thunderous basses at the beginning and the end, and a rapid rhythmic middle section which accelerates until the notes crash at high speed into the almost weightless last section. If Boulez shows here his mastery of intensity of expression in the most concise forms, then he finds an at least equal counterpart in Maurice Ravel, whose Menuet in cis, scribbled on the back of an exercise of one of his students in 1904, turned out to be a tiny masterpiece, despite its casual presentation.
Interpolations was composed after a period of more than 30 years, during which Boulez did not write any works for piano solo. A double commission was the driving force for returning to the instrument: the Umberto Micheli Piano Competition of Milan asked for a short compulsory work in to be performed in 1994, and Boulez was committed to write a new work for his friend Paul Sacher’s birthday in 1996. The initial version lasted only a few minutes, despite the many notes that the pianist had to play. The notes of the piece were mainly derived from transpositions of the symbolic pitch collection S-A-C-H-E-R: es (e-flat), a, c, h (b-natural), e and d/re.
In 2001, Boulez not only increased the metronome speed of the already fast-paced piece considerably, but he also added a huge section, bringing the duration of the work to about ten minutes. The long ‘melodic’ lines, after a rather free introduction, and the incisive interruptions by short repeated chords are striking. The title refers to these events, as well as to the similarly named rhythmic units of several notes analogous to a motif. Also very striking are the heavy and dark chords in the sections that Boulez had added after 1994. These chords are held by the pianist through the middle pedal. Even the ‘melodic’ sections have transformed into a frenzy of alternating rubato and strictly timed passages, almost being in a state of delirium.
The explanation for this mood change might be found through the fact that Sacher had died in 1999: half-way into the work, the character seems, correspondingly, to shift from breathtaking but icy gesturing into the foreboding grim tolling of bells.
Ralph van Raat 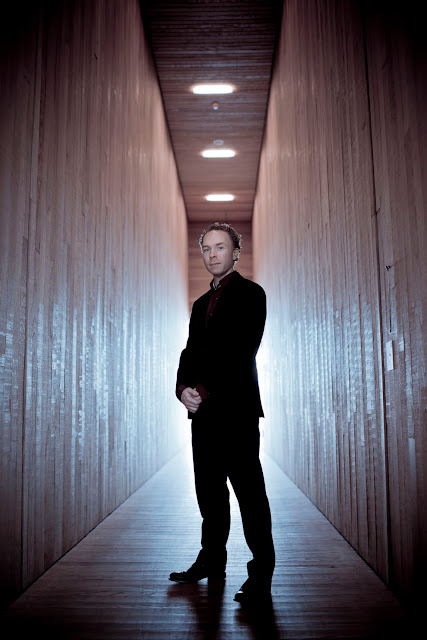