Mouvement de menuet
from the Sonatine for Piano (1903–05)

“One of Europe’s most exciting ensembles”, according to John Fordham (The Guardian), VEIN Trio has established a brilliant reputation among jazz audiences for both the stylistic diversity and technical accomplishment of its music. A vein is both a vessel through which blood runs and a style of play: in a classical vein, we say… in a humorous vein. And this embodies perfectly the attitude of the Swiss trio VEIN – Michael Arbenz (piano), Thomas Lähns (double bass) and Florian Arbenz (drums). VEIN carries the lifeblood of the jazz tradition; it is also one of the most stylistically diverse and adaptable ensembles.
Formed in Basel more than a decade ago, VEIN has released an album nearly every year since then, including two albums of collaboration with superstar saxophonist Dave Liebman and a version of Porgy and Bess. Most recently, VEIN has begun to explore the musicians’ classical training more explicitly with such project as The Chamber Music Effect and VEIN Plays Ravel.
VEIN’s music blends the traditions of European classical chamber music with a dedication to jazz improvisation at its most sophisticated. All three players have an extensive classical education. The trio was born when the Arbenz brothers met bass player Thomas Lähns, who also studied at the conservatory in Basel. With orchestral-standard sight-reading and ability to play with the bow, Thomas gives VEIN an unusual degree of balance and musical equality, in which all three players play a full musical part. “As a player with a full orchestral technique, Thomas has a more important role than some bassists. He’s crucial in holding me and Michael together,” says Florian Arbenz.
All three members of VEIN used to perform regularly with notable European classical ensembles, while their commitment to the jazz tradition finds expression in the collaborations they have made over the years with star veteran soloists. In addition to seriousness and originality, VEIN is also known for its humour, irony and flair. The 2013 album VOTE for VEIN was illustrated with a mock election poster and the compositions included playful allusions to swing jazz, as well as passages of superb straight-ahead improve which ­­exhibit the band’s flawless technique across all jazz traditions.
VEIN’s music is mostly written by the Arbenz brothers, with contributions from Thomas Lähns. Michael’s music is generally more composed and Florian’s pieces are freer and more experimental. VEIN explores the intriguing spaces between composition and improvisation, just as they do with jazz history and tradition. Although nearly everything they play is composed or adapted by a member of the band, sometimes working with familiar original music can highlight the complexity of the adaptation and performance. “It’s helpful that audiences already know Ravel’s melodies, because it makes it easier to appreciate the subtleties of the composition,” suggests Thomas.
VEIN performs from 50 to 70 gigs a year, touring worldwide, yet still records regularly and is currently engaged in several new projects with well-known European orchestras and big bands. For many ensembles, the concept of a band that’s also a family is just an elaborate metaphor, yet for VEIN it’s biographical reality. All three members of the trio have musical parents or grandparents and grew up in a house full of instruments. Drummer Florian Arbenz and pianist Michael are twins. So the brothers have been engaged in improvised music-making their whole lives. The band’s international audience continues to increase, but the charm and privilege of being in an intimate musical space remains. 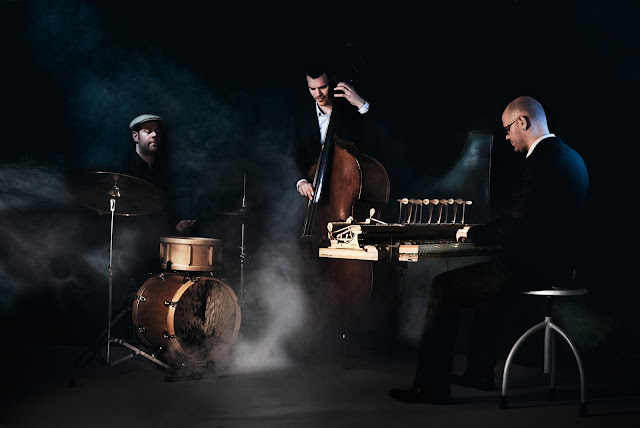 Michael Arbenz (b. 1975) is a classically-trained pianist and self-taught jazz performer. He brings the passionate curiosity of his self-directed investigations in jazz to the rigour of his classical performance practice. After studying classical piano in Basel, his international classical career has included collaborations with Pierre Boulez, Heinz Holliger, Jürg Wyttenbach and the Swiss new music ensemble Contrechamps.
Discovering a love of jazz as a child, his self-guided exploration of both the techniques of improvisation and the history of jazz was fresh and personal and his approach to improvisation is multi-layered rather than linear, using the piano as an orchestra. His jazz influences are very eclectic and include major jazz pianists across the history of the music, as well as colours and ideas from classical music.
Michael Arbenz has performed widely with the acclaimed VEIN Trio and has collaborated with international stars including Greg Osby, Glenn Ferris, Dave Liebman, Marc Johnson, Wolfgang Puschnig and Andy Sheppard. He also works as a composer and arranger. In addition, he teaches in the Jazz Department at the University of Lucerne. 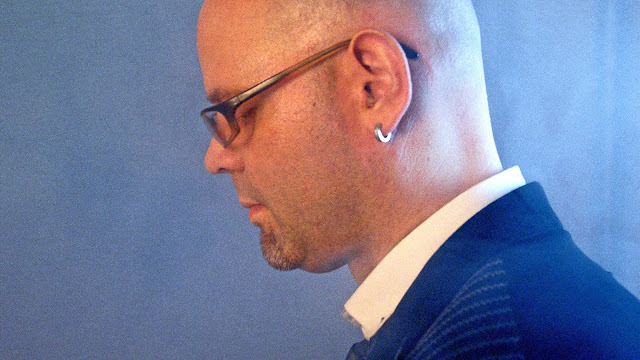 Double bass player Thomas Lähns (b. 1981) is a highly distinguished performer of both classical music and jazz. He combines the sophisticated bowing technique of the classical orchestra with the spontaneity of the jazz ensemble. His classical performances include appearances with Heinz Holliger and Peter Eötvös at the Salzburg Festival and Schleswig-Holstein Music Festival, as well as regular classical solo performances across Europe and South America. He is one of the few players to perform Hans Werner Henze’s Concerto for Double Bass.
As a teenager his first musical ambition was to play electric bass, inspired by a love of Iron Maiden, until he fell in love with jazz and learnt the double bass. He studied classical music in Basel with Wolfgang Güttler and Botond Kostyak and took masterclasses with Marc Dresser.
Thomas Lähns is much in demand on the jazz scene, playing in over 100 jazz gigs a year. As co-leader of VEIN Trio, he makes guest appearances with artists including Christoph Stiefel, Johannes Mössinger and the Swiss klezmer quintet Kolsimcha. His approach is in the tradition of Scott LaFaro, Richard Davis, Miroslav Vitouš and especially the great exponents of jazz bowing such as Slam Stewart and Major Holley. 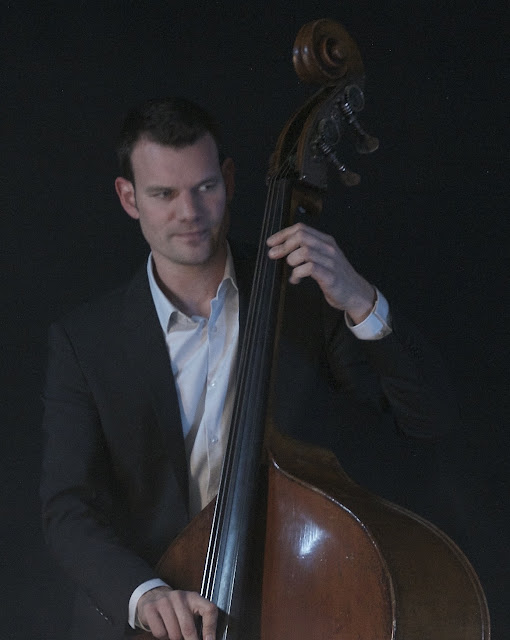 Florian Arbenz (b. 1975) is one of Europe’s most versatile and accomplished drummers. He has an unsurpassed jazz pedigree with the acclaimed Swiss ensemble VEIN Trio.
He got to know jazz through acquaintances such as Kirk Lightsey and Famadou Don Moye. He studied with Ed Thigpen and Steve Smith. He is also a classically trained percussionist, with extensive international orchestral experience and has performed with Peter Eötvös, György Kurtag and Christoph von Dohnanyi, among others. As a student, he spent six months at Cuba’s University of the Arts and has maintained an active interest in the international scene ever since, incorporating elements from Asian technique, as well as Afro-Cuban, in his own playing.
Florian Arbenz follows the careers of cutting-edge practitioners such as Chris Dave and Eric Harland very closely and hones his own technique with a similarly innovative focus. 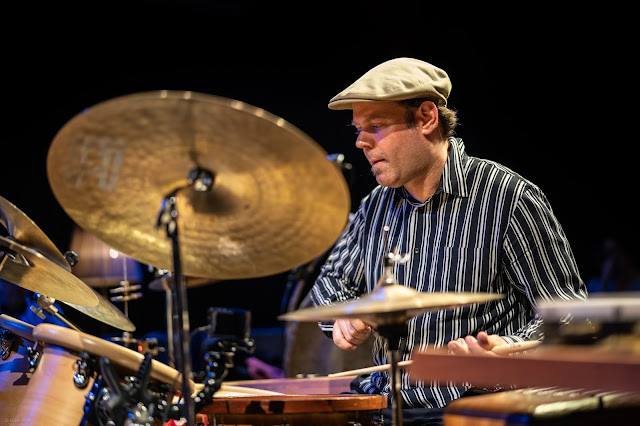 
Maurice Ravel (1875 – 1937) is a French composer of Swiss-Basque descent. His family background was an artistic and cultivated one and the young Maurice received every encouragement from his father when his talent for music became apparent at an early age. In 1889, at 14, he entered the Paris Conservatoire, where he remained until 1905. During this period, he composed some of his best-known works, including the Pavane pour une infante défunte, the Sonatine for piano and the String Quartet. All these works, especially the two latter, show the astonishing early perfection of style and craftsmanship that are the hallmarks of Ravel’s entire oeuvre. He is one of the rare composers whose early works seem scarcely less mature than those of his maturity. Indeed, his failure at the Conservatoire, after three attempts, to win the coveted Prix de Rome for composition (the works he submitted were judged too “advanced” by ultraconservative members of the jury) caused something of a scandal. Indignant protests were published and liberal-minded musicians and writers, including the musicologist and novelist Romain Rolland, supported Ravel. As a result, the director of the Conservatoire, Théodore Dubois, was forced to resign and his place was taken by the composer Gabriel Fauré, with whom Ravel had studied composition.
Ravel enriched the literature of the piano by a series of masterworks, ranging from the early Jeux d’eau (1901) and the Miroirs (1905) to the formidable Gaspard de la nuit (1908), Le Tombeau de Couperin (1917) and the two piano concerti (1931). Of his purely orchestral works, the Rapsodie espagnole and Boléro are the best known and reveal his consummate mastery of the art of instrumentation. But perhaps the highlight of his career was his collaboration with the Russian impresario Serge Diaghilev, for whose Ballets Russes he composed the masterpiece Daphnis et Chloé. His best-known opera is L’enfant et les sortilèges and his only other operatic venture had been his brilliantly satirical L’heure espagnole. As a songwriter Ravel achieved great distinction with his imaginative Histoires naturelles, Trois poèmes de Stéphane Mallarmé and Chansons madécasses.
In 1928, Ravel embarked on a four months’ tour of Canada and the United States and in the same year visited England to receive an honorary degree of doctor of music from Oxford. That year also saw the creation of Boléro in its original form as a ballet, with Ida Rubinstein in the principal role.
The last five years of Ravel’s life were clouded by aphasia, which not only prevented him from writing another note of music but also deprived him of the power of speech and made it impossible for him even to sign his name. An operation to relieve the obstruction of a blood vessel that supplies the brain was unsuccessful.
Maurice Ravel was among the most significant and influential composers of the early 20th century. Although he is frequently linked with Claude Debussy as an exemplar of musical impressionism and some of their works have a surface resemblance, Ravel possessed an independent voice that grew out of his love of a broad variety of styles, including the French Baroque, Bach, Mozart, Chopin, Spanish folk traditions and American jazz and blues. His body of work was not large in comparison with that of some of his contemporaries, but his compositions are notable for being meticulously and exquisitely crafted. He was especially gifted as an orchestrator, an area in which one can argue he remains unsurpassed. 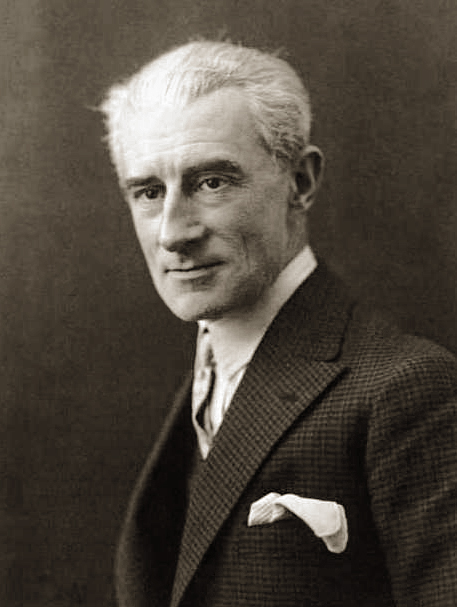 After exploring ideas from classical music on their last album The Chamber Music Effect, the innovative VEIN Trio continues to resolutely pursue this path with their latest production VEIN plays RAVEL – a collection of compositions by French composer Maurice Ravel.
Maurice Ravel was an obvious choice for VEIN Trio. Although the composer, who was arguably one of the most enigmatic figures of classical music, lived over 100 years ago, his compositions share a lot of common ground with VEIN’s soundscape. Ravel lived in an era during which representational tradition transitioned into abstract modernity. The Swiss trio finds itself in a similar situation: breaking new ground with its music without rejecting the traditional values of jazz. Likewise, Ravel helped himself to many styles of music for his compositions, including Baroque, Spanish music and jazz. VEIN’s influences are similarly multifaceted. The underlying idea of VEIN plays RAVEL was to use select pieces by Maurice Ravel as a template, translate them into VEIN-esque musical language and thereby repeat Ravel’s approach some 100 years later.
VEIN chose very diverse compositions for which Maurice Ravel used various stylistic models. For example, three pieces from the suite Le tombeau de Couperin, in which Ravel refers to Baroque music, or the Blues taken from Violin Sonata No. 2, and the 5 O’Clock Foxtrot from the opera L’enfant et les sortilèges, for which Ravel used sounds from jazz and the salon music of the time.
Just as Maurice Ravel helped himself with different styles of music and translated them into his musical world, VEIN Trio draws its inspiration from Ravel and has added new elements like grooves and improvisations, thus creating a sound that is unmistakably VEIN yet constantly resonates Ravel’s spirit.
VEIN Trio 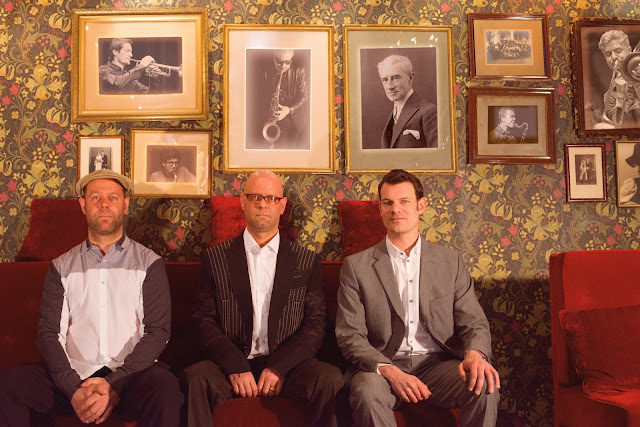