Carnaval in the Mist (2017) *
{performed by Yoana Georgieva}

Gergana Nestorova (b. 1989) was born in Nessebar (Bulgaria). She graduated from the “Prof. Pancho Vladigerov” National School of Music and Stage Arts (Burgas) in 2008, where she studied piano with Julia Nenova. From 2008 to 2013, she was a student at the “Prof. Pancho Vladigerov” National Academy of Music (Sofia) under Prof. Marina Kapatsinskaya. In 2013, she graduated with a master's degree, and in 2019 she successfully defended her doctoral dissertation on the solo piano music of Julia Tsenova. In September 2019 after successfully passing an audition, she was appointed as a teacher of piano at the “Lyubomir Pipkov” National Music School in Sofia.
In 2010, she participated in the master class of Prof. Dmitri Bashkirov as a part of The International Summer Academy in Salzburg, Austria. She has won awards from international competitions in Bulgaria, Romania, France and Italy.
Gergana Nestorova has been in concert both as a soloist and as a chamber musician. She has participated in the Varna Summer International Music Festival (2019), The Music of Europe International Festival (organised by the Sofia Philharmonic, 2019), Artis International Classical Music Festival, New Bulgarian Music (2018), ppIANISSIMO International Festival of Contemporary Piano Music (2011, 2015 and 2016), Katya Popova Laureate Days (2016), European Music Festival (2013) and the Concert for the 90th Anniversary of National Academy of Music – Sofia (2011). She has also performed as a soloist with the Sofia Philharmonic Orchestra, Sinfonietta – Vidin, Sinfonietta – Shumen, Burgas Philharmonic Orchestra, Pazardzhik Symphony Orchestra and the Academic Orchestra of the National Academy of Music.
In 2018, she had a particularly successful tour in Japan – presenting a rich recital programme consisting entirely of works by Chopin in a number of cities. During her Japanese tour, she also performed as a soloist with the Tokyo-based Mozart Virtuoso Orchestra.
She has recorded for the Bulgarian National Radio and Bulgarian National Television. 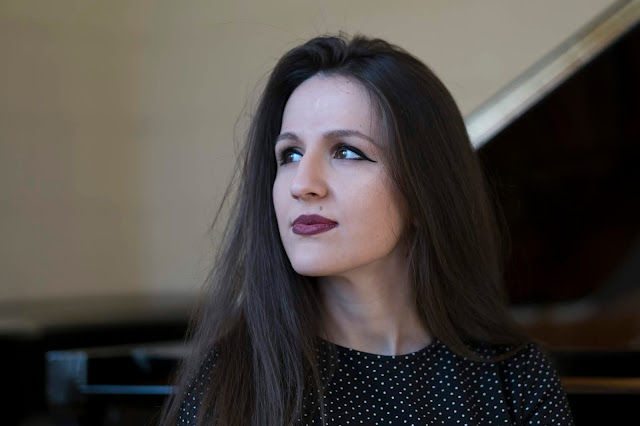 Alexandra Radoulova (b. 1989) has graduated from the “Prof. Pancho Vladigerov” National Academy of Music in Sofia in the piano class of Prof. Stella Dimitrova-Maystorova. Her interest in new music started already in her youth and she continued working intensively in this direction during her university studies in Sofia. After her graduation, she moved to Vienna, where she studied free improvisation and interpretation with Manon-Liu Winter.
In 2014, she won the award for best interpretation of a contemporary music piece at the International Summer Academy organised by the University of Music and Performing Arts in Vienna. That same year, she started studying Performance Practice in Contemporary Music – a master’s degree programme at the University of Music and Preforming Arts in Graz, which she graduated from in 2018. In 2017, she became an alumnus of the Lucerne Festival Academy, founded by Pierre Boulez.
She has specialised in the areas of chamber music and ensemble practice. She has worked with composers like Tristan Murail, Beat Furrer, Friedrich Cerha, Ian Robin, Francesco Filidei, Bernhard Gander, Klaus Lang, Georg Friedrich Haas, Heinz Holliger, Simone Movio, Geard Kühr and others. She has occasionally played with ensemble Klangforum Wien and from 2016 to 2019 she worked as a pianist in their study programme. She has also worked as an organisation assistant for the ensemble. In Graz, she continued her free improvisation studies together with Elisabeth Harnik and Annette Giesriegel. Since 2016, she has been a member of STIO – the Styrian Improvisers Orchestra.
She is also interested in promoting new music and free improvisation. She has worked as an assistant in the workshops Interface (2014, 2015 and 2016), in the andrä musik: Kunstvermittlung (2016) – a project of Klangforum Wien for children and adolescents from different ethnic origins, as well for the workshops of the festival Collective Thoughts (2015). In 2016, together with her colleagues, she realised a project of her own – Klang_Stadl 2016 – a music workshop for amateur musicians that won state sponsoring for further editions. She has participated in festivals such as Impuls, ECLAT, Interspeech, etc. 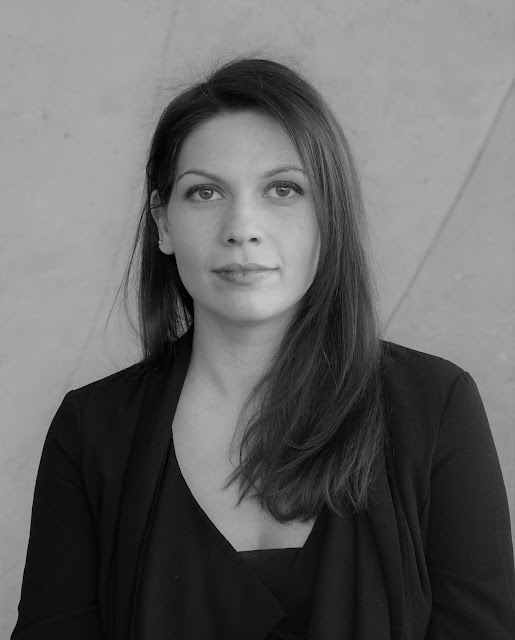 Yoana Georgieva (b. 1999) has graduated from the “Prof. Assen Zlatarov” Language School in Veliko Tarnovo, studying German and English. In her high school years, she studied piano at various music schools. Subsequently, she became a private student of Prof. Lilia Naumova. In 2018, she entered the “Prof. Pancho Vladigerov” National Academy of Music majoring in choral conducting under Prof. Teodora Pavlovich. There she also studies in the piano class of Ch. Asst. Prof. Margarita Ilieva, PhD. She has participated in the piano master classes of professors Tomislav Nedelkovich-Bainov, Tamara Poddubnaya, Viktor Chuchkov, Rostislav Yovchev and others.
She has won numerous competitions, including the Heirs of Orpheus International Music Competition (Albena, 2015 and 2016), the Bursa Nilüfer International Piano Competition and Music Festival (Turkey, 2016), the Musical Fireworks in Baden-Württemberg (Germany, 2017) and the Hope, Talents, Masters International Youth Music Competition (Dobrich, 2008). 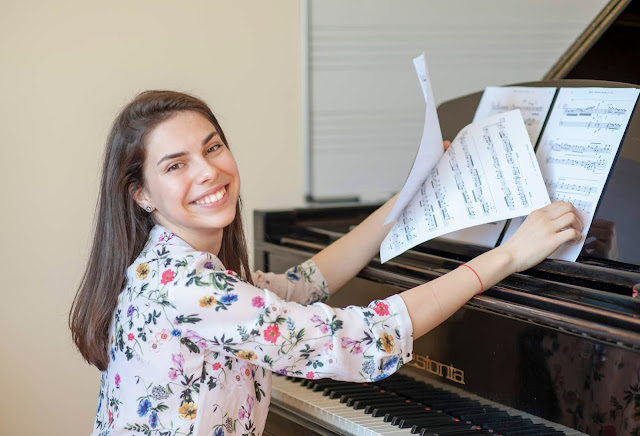 Kristian Todorov (b. 2001) is studying at the “Paisiy Hilendarski” High School of Mathematics and at the SoftUni Software Academy in Sofia. He has studied piano at the “Elin Pelin” Community Centre with Binka Georgieva. Professors Milena Mollova, Lyudmil Angelov and Borislava Taneva have also contributed to his musical development. He has participated in a number of national and international competitions, including the “Pancho Vladigerov” International Piano and Violin Competition (Shumen) and the Windsor International Piano Competition (London). 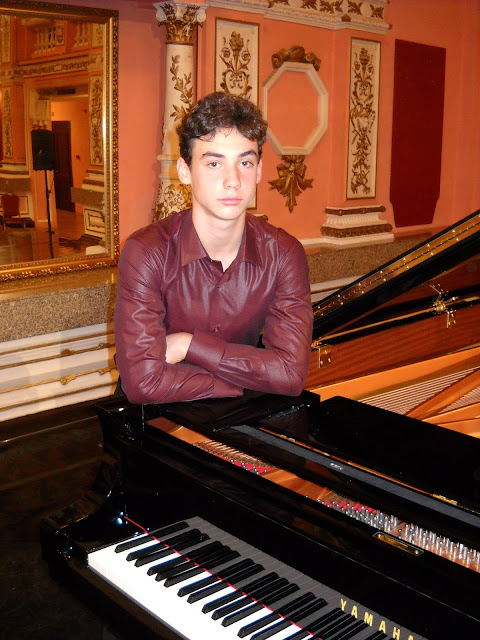 Ivane Béatrice Bellocq (b. 1958) is French composer and flutist. She studied with Roger Bourdin and Michel Debost (flute), Max Deutsch (analysis) and Olivier Greif (composition). She has won several international composition competitions and numerous prizes as a flutist. Previously a teacher at the École normale de musique de Paris, then director of Saint-Cloud’s School of Music, she now devotes herself to flute playing and composition.
Her oeuvre includes vocal works in English, French and German after texts by such poets as Alfred Tennyson, Charlotte Brontë, René Char and Emily Dickinson, among them Meduana and numerous pieces with narrator; as well as chamber and orchestral works, among them Hallucination for chamber orchestra, Symphonie déconcertante for three soloists, orchestra and jazz band, Paradise is of the Option for voice and cello, Der gelbe Klang for trumpet, two pianos and two percussions, Estrans for sextet (commissioned by Radio France), Le tombeau d’Olivier Greif for piano quartet (commissioned by Théâtre du Châtelet, Paris), a trilogy of concertos (for electric guitar, for ondes Martenot and for concrete mixer, electric guitar and ondes Martenot), Lleennttoo for orchestra, Paysage avec ruisseau for flute and string orchestra.
Among her numerous CDs, all published by DUX, are Obsession (2010), East Wind (2014) and Melodramas (2018).
In 2011, a conservatory after her name – the Bellocq Music School – was opened in Mayenne (France).
As a flutist, she performs regularly all over Europe and in the USA. 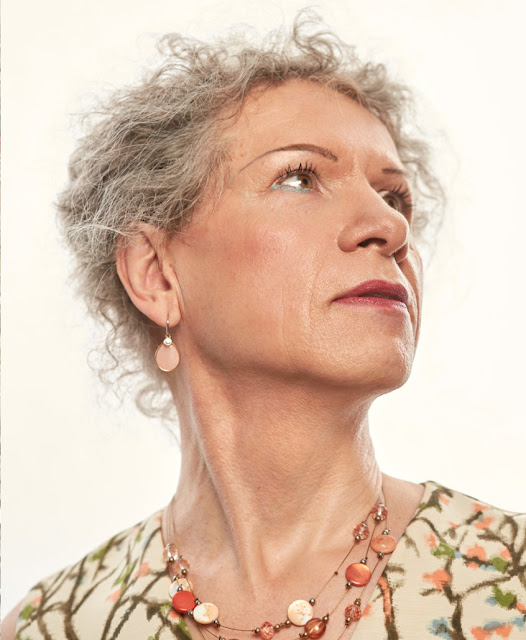 Françoise Choveaux (b.1953) takes up a musical tradition anchored in the 19th century – she is a composer but also a pianist. She studied at the Academy of Lille, the École normale de musique de Paris, the Institute Peabody of Baltimore and the Juilliard School of Music in New York.
As of today, she has already written more than 170 works for most instruments and formations, from single instrument to symphony orchestras. Her works are played in Europe, Asia and America. Numerous live and studio recordings have been made of her music.
Each of her works is inspired either by journeys and emotions or connected directly with a literary or visual work. In her musical route chamber music has always played an important role, with works written for prominent soloists as well as for established ensembles. Her quartets, for example, were created for and interpreted by such quartets as the Vilnius String Quartet, the Rimsky-Korsakov String Quartet, the Debussy String Quartet, the Ravel String Quartet, the Danel Quartet and the Stanislas String Quartet.
In 2002, she began an important cycle dedicated to orchestras. First of all, by pursuing her series of three symphonies for strings, today known and interpreted by several orchestras, including the Saint Petersburg Philharmonic Orchestra, Marseille Philharmonic Orchestra and Baden-Baden Philharmonic Orchestra. Then, by writing a series of concerti.
As a pianist, Françoise Choveaux performs at prestigious festivals in Europe, Asia, the United States and Brazil. She has recorded the complete piano work of Darius Milhaud at the suggestion of Madeleine Milhaud, the composer’s wife. 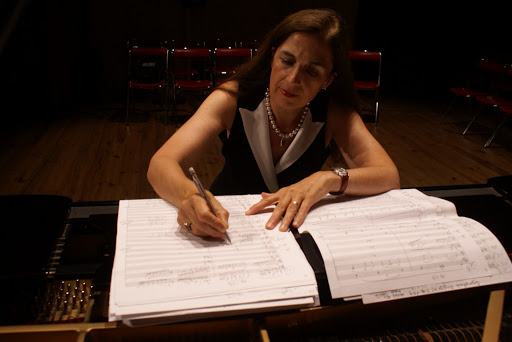 In Iceland extreme heat and extreme cold can be found at the same place. With no intermediary. In this respect, it is a black and white country – as is the keyboard of a piano, visually speaking. The piece Iceland is quite similar in its contrasts. Its first movement – Lava – explores the limits of perception we can have in the extreme bass register of the piano, whereas the second movement – Ice – does it the same in the extreme treble. It is surprising to notice how much the ear improves as soon as we listen to the same piece a second time. We begin to discern melismas whereas the first time we were only discerning a sonorous lava (in the extreme bass), and percussion or screeching (in the extreme treble). The third movement – Fault – refers to the fault right in the middle of this country – the mother of the faults of our planet, which cuts it entirely in two, just as it cuts the bottom of the Atlantic Ocean in two. The East and the West parts move inexorably away from each other – thus shall move the hands of the artist.
The piece Movement is one of the pieces that I composed under the direction of my teacher of composition, Olivier Greif. I have, of course, evolved a lot since then, but this piece is still representative, I believe, of some of my constants: energy, incantation, asymmetrical rhythms...
The powerful and colourful Carnаval (Op. 9) by Robert Schumann is both virtuosic and profound. However, it contains elements of the composer’s tragic end. His inclination to a dual or split personality is very much present in this work. I think it is the announcement of this kind of mist which will invade him more and more. Two centuries later, the beginning of my own piece – Carnaval in the Mist – is very close to that of Schumann’s, but the “mist of time” introduces transformations, which increase with the progressive darkness or filter of his brain. Logically, little by little the music self-destructs... all can only be submerged, unachieved...
Ivane Béatrice Bellocq

The Winter Sonata is the first work of a piano sonatas cycle I started to write after the seasons. Similar to most of my pieces, this is telluric music which is inspired by nature, poems or paintings. This sonata was written for and world premiered by Émile Naoumoff – famous French pianist and composer of Bulgarian origin and last student of Nadia Boulanger.
I wrote the cycle of 11 Préludes-Tableaux while I was composer-in-residence in Tourcoing (France) from 2015 to 2017. As quite often, I collaborated with museums. So, during my residence there I wrote these pieces inspired by the works of Eugène Leroy exhibited at the MUba Eugène Leroy Contemporary Art Museum. Some of them, as well as the two included in the programme, are orchestral in several aspects.
Bulgarian Impressions for two pianos is a piece dedicated to Borislava Tavena, who had already performed the premiere of 24 piano preludes of mine in Luxembourg in 2019. I made some research into the cultural heritage of Bulgaria and choose three themes as my inspiration. They were just my feelings, my impressions. The first movement – Rila Monastery and the Seven Rila Lakes – begins with an introduction of a slight oriental colour, describing the landscape of the seven lakes. In the middle section, a chorale-like prayer unfolds slowly, emphasising always the same theme as an imploration, and moves on before slowing down and ending in the style of the beginning, as a spiritual dream. The second movement – Dance over Fire – is a fast dance piece full of energy from beginning to end, as if a spirit has taken over the soul and the dancer is losing control. The third movement – Bulgarian Soul – expressed my feelings about the Bulgarian heart.
Françoise Choveaux 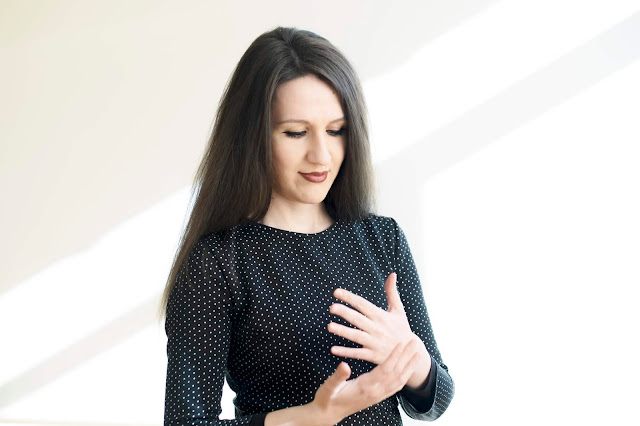