Noris Getov (b. 1993, Bulgaria):
Sonata for accordion and harpsichord (2018) **
[commissioned by ppIANISSIMO, written for Duo Diagonal]

The event is held under the patronage of
H. E. Søren Jacobsen
(Ambassador of the Kingdom of Denmark)
and thanks to the generous support of:


Duo Diagonal is an innovative duo with a very special instrumental cast: harpsichord and classical accordion. The heyday of the harpsichord was in the Baroque period, while the modern concert accordion has especially in the last decade become recognised as a classical solo instrument. Today, they are both equally vivid and are related to each other by both being polyphonic instruments supplied with multiple keyboards and registers.
The duo was formed in 2005 – in the discovery that these two instruments, both historical and acoustical, almost completely the opposite of each other, manage when combined to surprise the listener with colossal sound depth, intensity and nuances. In Duo Diagonal, the Baroque and the present meet, “personified” by the two instruments. The instrumentation gives possibilities for a uniquely varied and colourful repertoire; both musicians are equally at home in music from the Baroque and contemporary music, and even in music from around the world. The two instruments are each experienced in their customary element and in wholly untraditional ways.
Duo Diagonal performs with equal commitment music from the Baroque period and music from the 20th and 21st century, including new pieces dedicated to the duo. Duo Diagonal has performed at concerts and music festivals in Denmark and abroad, and released the CD Incontri (Encounters) with music by Timme Ørvad, Leif Kayser, Leonid Bashmakov, Francois Couperin, Johann Matheson, Armand-Louis Couperin and Pancho Vladigerov.
www.duodiagonal.dk 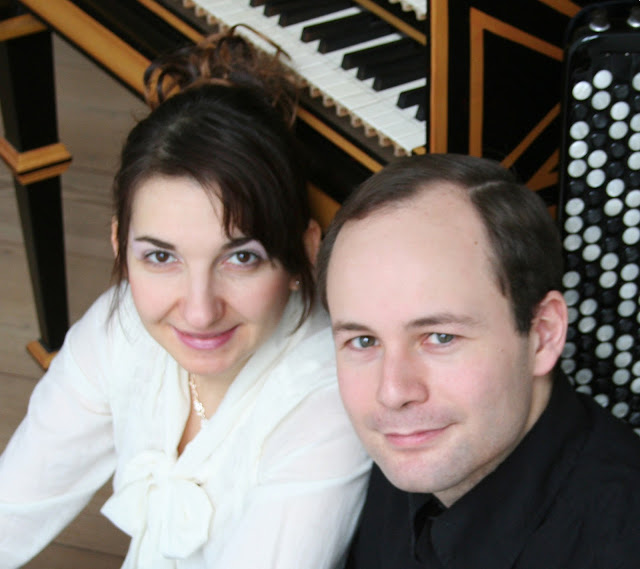 
Anka Zlateva (b. 1971) is from Bulgaria and was educated at the “Pancho Vladigerov” National Academy of Music in Sofia with piano and accordion. Since 1999, she has been living in Denmark where she studied button accordion with Geir Draugsvoll and harpsichord with Karen Englund at the Royal Danish Academy of Music. She enjoys an active concert and educational career on both instruments and is deeply committed to the performance of early as well as contemporary music.
She has won numerous international prizes, toured with various chamber music ensembles in Ukraine, Austria, Italy and Germany, among other. She has also performed as a soloist with orchestras in Bulgaria and Denmark.
Her repertoire as solo harpsichordist includes works of among others: J.S. Bach, C.P.E. Bach, Böhm, Buxtehude, Couperin, Rameau, Le Roux, Frescobaldi, Scarlatti and Purcell, as well as pieces for harpsichord by contemporary composers, like Ligeti.


Adam Ørvad (b. 1976) was educated at the Royal Danish Music Academy and had his official soloist debut in 2005 with one of the most comprehensive programmes ever played on this instrument.
He is a very active musician in many different genres, performing with a number of Danish and international ensembles such as Ensemble Modern and musikFabrik. He has played at festivals such as the Festival of Radio France in Montpellier, the Huddersfield Contemporary Music Festival, the Darmstadt International Summer Courses for New Music, the Festival of Contemporary Music in Havana, the Tempus Fugit festival in Buenos Aires and many others.
His repertoire is a selection of the cornerstones of the accordion literature, new works that came into existence in collaboration with many contemporary composers, as well as innovative arrangements and transcription for accordion solo, many different chamber combinations and even musical theatre and opera. In addition, Adam Ørvad is also a capacity on folk music from the Balkans. He leads his own Orfeus Bаlkan Ensemble.
www.adamorvad.com